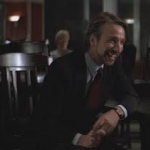 I have seen this film too many times to count, so much so that I could recite the script in my head.

Yeah, it's that good.

It is one of my all time favorite movies ever since my mother introduced it to me. I honestly think that The 'burbs is one of the funniest movies of all time. The more you watch this film, you notice more things you never picked up on before. The 'burbs has so many clever, subtle dark jokes that sneak their way in without you being any the wiser until your fourth or fifth viewing, i.e, the Klopek home is destroyed in a "hideous, raging inferno", the Tru-Green man leaving immediately after Hans steps outside for the first time, and literally minutes after finishing all of the Peterson's leftovers (including ribs, dog food, sausage and a pineapple) Art asks Ray if he wants to accompany him to the local deli for a sandwich. Watching a film multiple times like this may sound a little extreme to the average moviegoer (espescially for a film so obscure and dated) but it really isn't. Once you see this movie, you just have to fall in love with it. I watch it several times a year and often find myself thinking about it or saying its lines to my family after one of my suburban neighbors does something that reminds me of the quirky residents of Mayfield Place. This is one of those films where there is literally a joke every other moment. You just have to know where to look.

I normally don't bother with movies that focus around a single movie but for this film, I think it must be preserved and quite frankly, deserves its own wiki, even if it doesn't need one.

If you have any questions, don't hesitate to ask!

Wikia is a vast, overpopulated wasteland. A cursed network. Within it lies a cursed wiki. An unbroken black-and-white landscape. Unfinished, abandoned, convulsing, choking. Breaking under its own weight. Only one thing fighting for order and completion in the chaos. The men and women of the Wikia editing system. Editors have not touched this wiki in months, if not years. Pages riddled with sections started but not completed. This film needs to be preserved and remembered. It's time to clean house. Judgment has come.

Retrieved from "https://theburbs.fandom.com/wiki/User:Votesmall?oldid=4361"
Community content is available under CC-BY-SA unless otherwise noted.